Greetings and Salutations, my dearest blog.

Today is a beautiful day, cloudy, breezy, chilled weather, and I am in love with it.

We also have a new employee join the team today, and she is such a bubbly happy person, I hope to everything that this place doesn’t knock it out of her, because that is an energy we absolutely could use around the work place.

I am sure I am not the first to notice, but sometimes when you get a new person around the office, they have all the excitement and passion of having started recently, exited to be on the team, to join the group. The excitement of expansion can be had, when you are a new employee who hasn’t worked themselves half to death to make the expansion happen.

It is just really nice, and I for one am so damn glad to have a former corporate professional who kind of brings THAT mentality to the table.

I know I am a cynic, but in my day to day, I am trying to stay positive, often, so having someone who is also putting their very best out there, can see the big picture of what we are doing, and have passion, is a good thing.

Sometimes, at my job, we all have SO MUCH PASSION that we can end up being assholes, taking ourselves too seriously or, taking everything too seriously, so having someone who can appreciate the seriousness but can also be happy and positive…I am very happy with our new hire, and while I know she is just a temporary addition, i hope she stays a while.

It is late morning now, and I have been pretty busy this morning, been updating whilst on hold or waiting for coworkers to do X, Y or Z.

Anyways, It has been a bit busy, with the new person needing paperwork and to be shown around/set up, and now I am trying to finish my bagel.

I was able to return emails and answer a few phone calls.

Now I need to do more of that, plus prepping for the end of the month, which all my fellow accountants and book keepers out there no- It can be crazy, more so when we have had one of our busier months.

So, I am going to work on that, but I will also be updating this every chance I get.

I know in yesterday’s blog I wrote about Preptober for NaNoWriMo in November, but the second half of this blog may be me deciding if I really want to even do NaNoWriMo.

First: This is not fear. I am more than capable of completing NaNoWriMo. I have won several times, although NaNoWriMo’s counter keeps deleting wins, I have succeeding in writing 50,000 words in the  month of November a few times.

Second: I have grown as a writer since those times, as well, and now am capable of writing even more per day, and of a better quality too. I am sure whatever I may write for NaNoWriMo, even on first pass, will be leagues better than past stuff i have written and edited into being quality. Writing and blogging every day are honing my skills, making me more able to not only crank out a high word count, but for that word count to be of a decent caliber.

Formally, forums were on the NaNoWriMo site. Now, they are apparently going to be on discourse.

1.) You are severely moderated until you “prove yourself” or whatever, despite, I think, any previous activity on the forums.

This alone is pretty craptastic.

2.) Discourse, like all other gamer heavy platforms, are not always kind to females.
If you don’t believe me, you obviously haven’t been gaming long, and don’t remember GamerGate. Or, you simply never knew about GamerGate, because your privilege allows you to move through the world blissfully unaware.

3.) I do not want to have to go ANOTHER site simply to connect with people doing NaNoWriMo. I want to connect on the site where NaNoWriMo is hosted.

4.) Community outreach.  I live in Houston, and it seems like the municipal leaders we had during my past NaNoWriMo’s, were MUCH more engaging, and actually made you want to go and meet other writers.

I wanted to vlog this year, and it seems like I could easily just do that from home.

Also, it seems the writers we do have aren’t exactly friendly anyways.

5.) Do they care about writers, I mean professional writers working hard to get their writing careers blooming? Or do they care about people with jobs donating money in exchange for random swag crap?

I get that some money goes towards the young writers program but also…there are other underserved and marginalized groups. Not just kids.

I don’t NEED NaNoWriMo to crank out 50,000 words in a month, I literally do that by myself every single month.

NaNoWriMo does, however, NEED people like myself and other writers, to talk about and participate in NaNoWriMo to keep it relevant.

It needs the very people it isn’t serving, in order for the entire model to even work.

Which, it should be noted, is the problem of many organizations that do not make diversity a priority.

6.) Why the fuck is the entire Houston group a bunch of fucking people in the goddamn suburbs?

PEARLAND IS NOT HOUSTON.

SUGARLAND IS NOT HOUSTON.

CONROE IS NOT HOUSTON.

These people live OVER AN HOUR outside of the city limits, EVEN MORE with traffic.

I just feel when it comes to NaNoWriMo, maybe it shouldn’t ONLY BE FOR people who don’t have the discipline to write every day.

People who are capable of doing it should ALSO get something out of it, more so if you are gonna hit them up for cash every day.

So, I am going to give it till Halloween to decide, and I will still be writing on the project I would have written anyways.

Basically, I will still DO NaNoWriMo, because I am a dedicated writer who has a project planned…But I don’t know if I will participate with NaNoWriMo…What you participate it speaks volumes about who you are.

And I care about diversity, especially in writing.

Man, nothing makes you realize the week isn’t whizzing on by like typing “Tuesday Evening” when it feels much later in the week than that.

Anyways, Bret is recording for Bigg’s “The Black Tuesday Podcast” and I was looking at some vlog editing software that Sarah (@sarahppeyton on IG and she has a YT as well- link is in her bio go watch) had recommended to me.

She was kind enough to offer to make some help guides to guide me through some vlog editing tips- I don’t have huge goals but if I could make better graphics for the blog and vlog, and just in general, and if I could put pretty text on my vlog, I would be so ecstatic and would really feel like I have taken it to the next step.

But the stuff is greek to me and I have no idea what I am doing, so I figured, fuck that, let’s blog. I like blogging more. I’ll check it out again after I do the computer/vlog stuff I mention later on in this blog.

But I also want to get some writing done, I have some Roxy stuff planned for this week, and I want to make sure I get it all out on my time line, because NaNoWriMo begins this week as well.

“But Abbi, haven’t you been railing against NaNoWriMo all blog?”

“No, my wonderful Blog Reader, it hasn’t been the ENTIRE blog, but I get your sentiment.”

I will likely still commit to doing NaNoWriMo, in so much that I have the “other half” of Flake City, as a new project, and the character, (now named thanks to my cannabis hero, Todd McCormick), Kaya. I will write at least 50,000 thousand words in the month of November.

I do not know if I will attend any NaNoWriMo events, or donate any money. I don’t know what I will be doing. I just don’t know. I will sleep on it, I guess, but I don’t know.

But, as I mentioned, my writing habits mean I will still *do* NaNoWriMo…

Anyways, I have this Roxy bit of story to work on, and the bit I worked on earlier was juicy as hell.

Roxy has always been a concert girl, but this time, she has to pass on a concert.

I have been working hard at the best way to craft and reveal certain secrets and sometimes it is nice to just let my favorite narrator, Roxy do it. There is a reason she is my narrator.

And yes, sometimes she is very bold, very blunt, and very in your face.

So, I have Roxy writing to do, and I should probably upload the vlog footage I have and edit it together.

I have also not been vlogging due to space issues on my computer, I desperately need some external storage, and I will need to make some major deletes before I can even do any editing.

My plan is to delete what I have to and make a new vlog. I have one saved and done that I have to add some music to, and another I have some basic footage for, but honestly, I may just delete it all and start fresh again tomorrow. All of this and it is after 10, so I need to wrap this up and turn to my other obligations.

I will say that I have a few blogs I am also working on, some by request and some because I think they may help some of you I have been talking with.

I look forward to you reading the blogs I have planned, and feel free to comment or DM if you have any requests.

Have a wonderful Wednesday. Thanks in advance for not saying “hump” to me today. 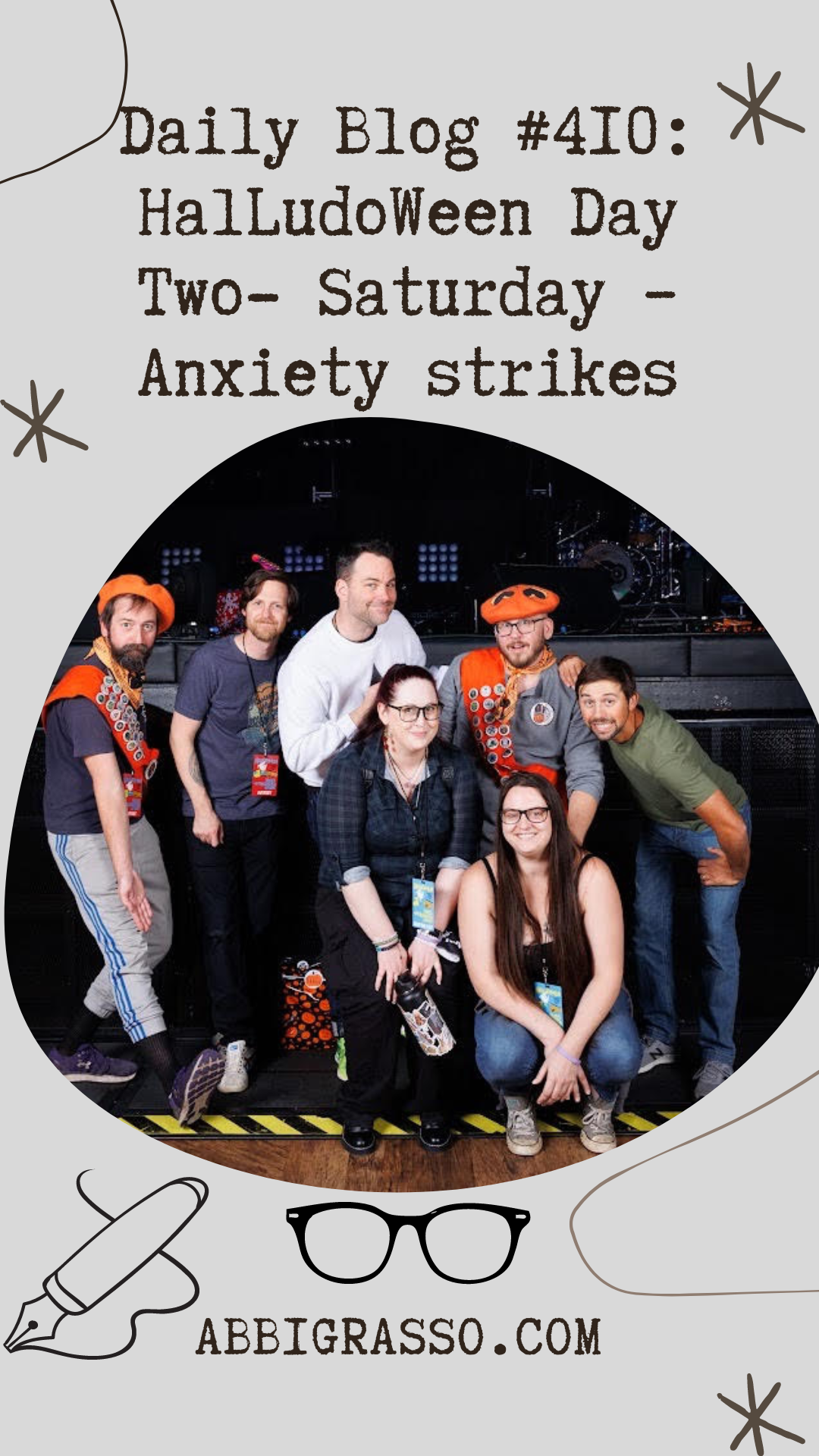 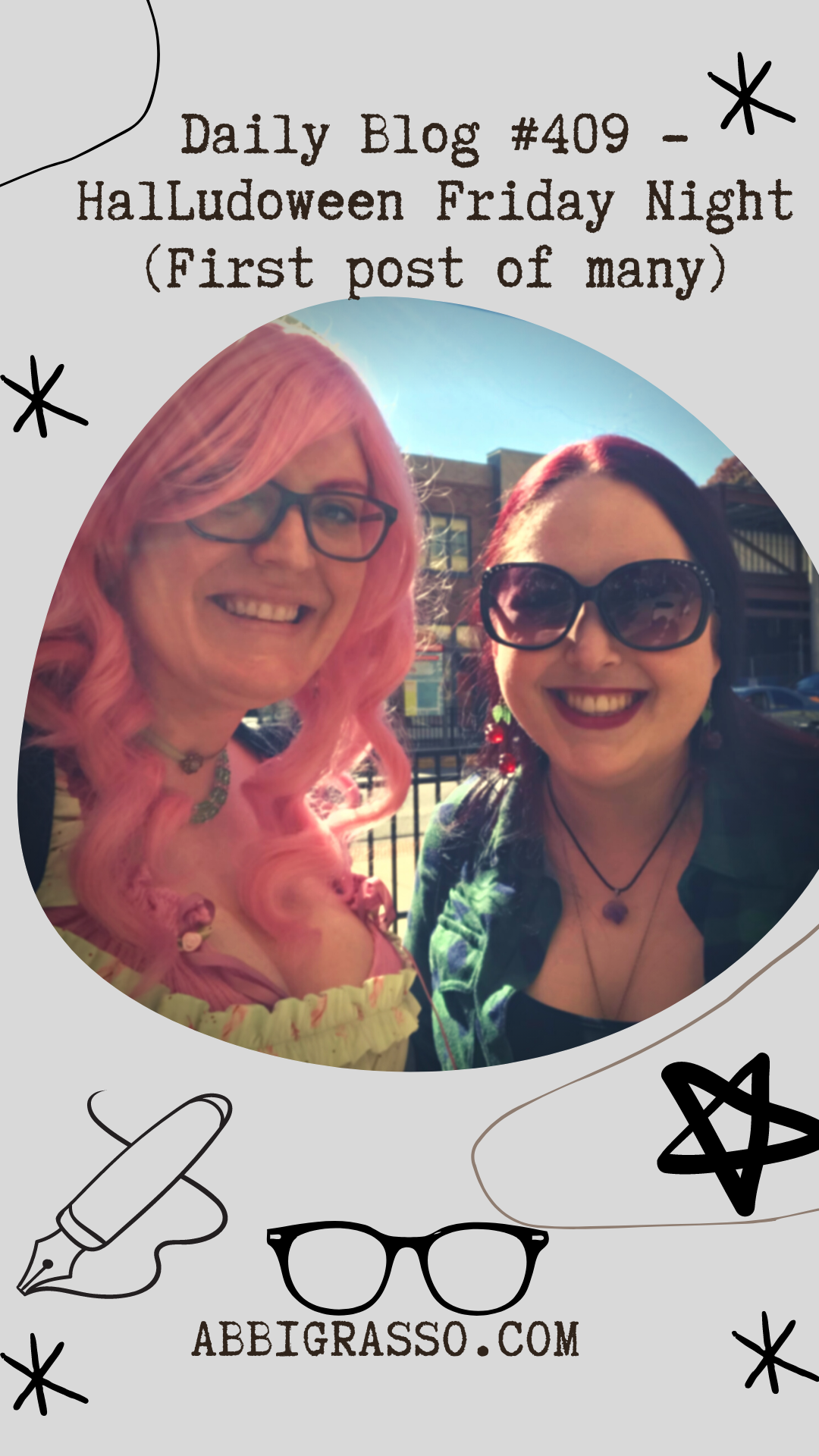 Daily Blog #408: The power of a good night of rest on mental health (and my really weird but good dream I had last night) 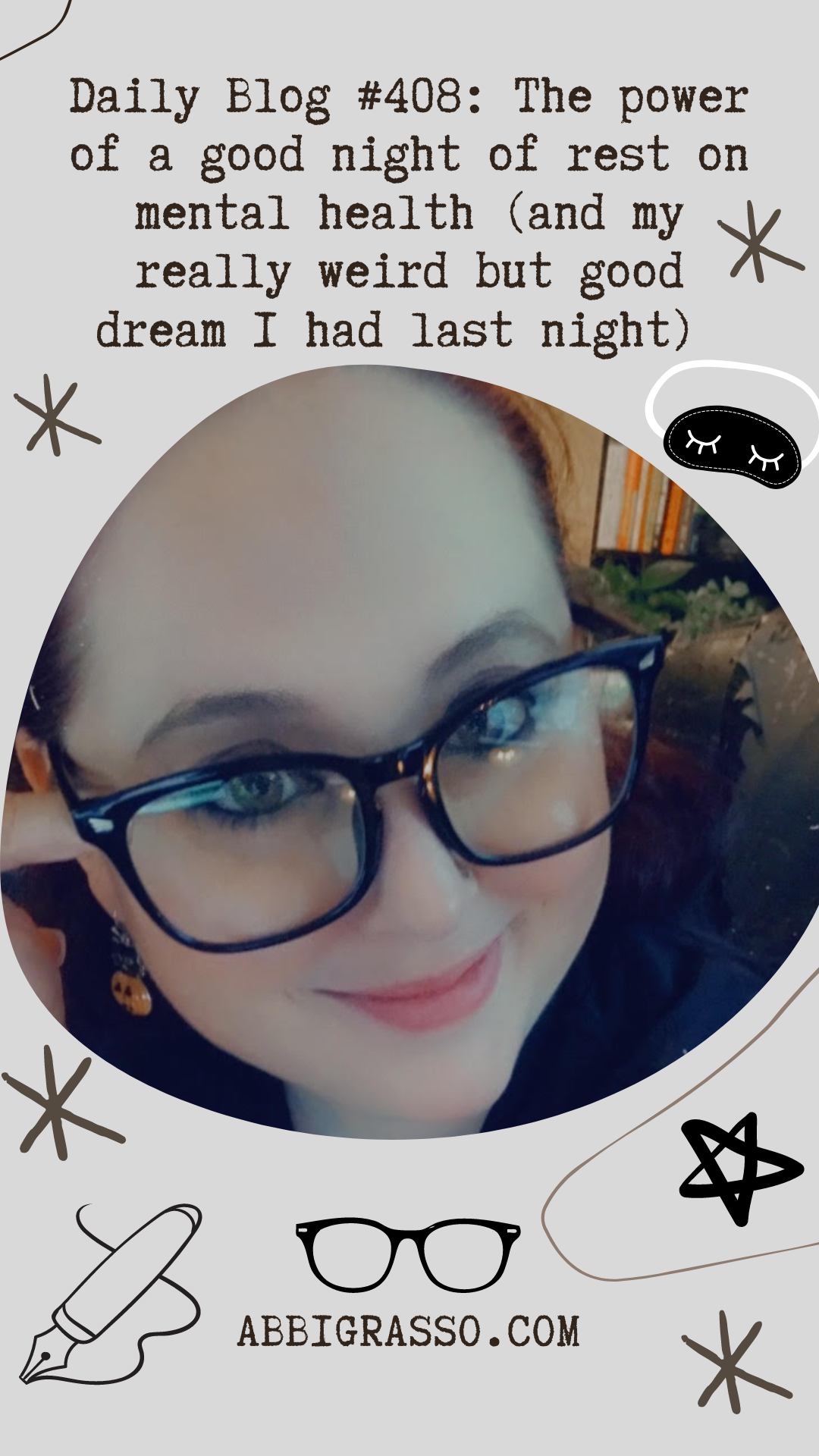 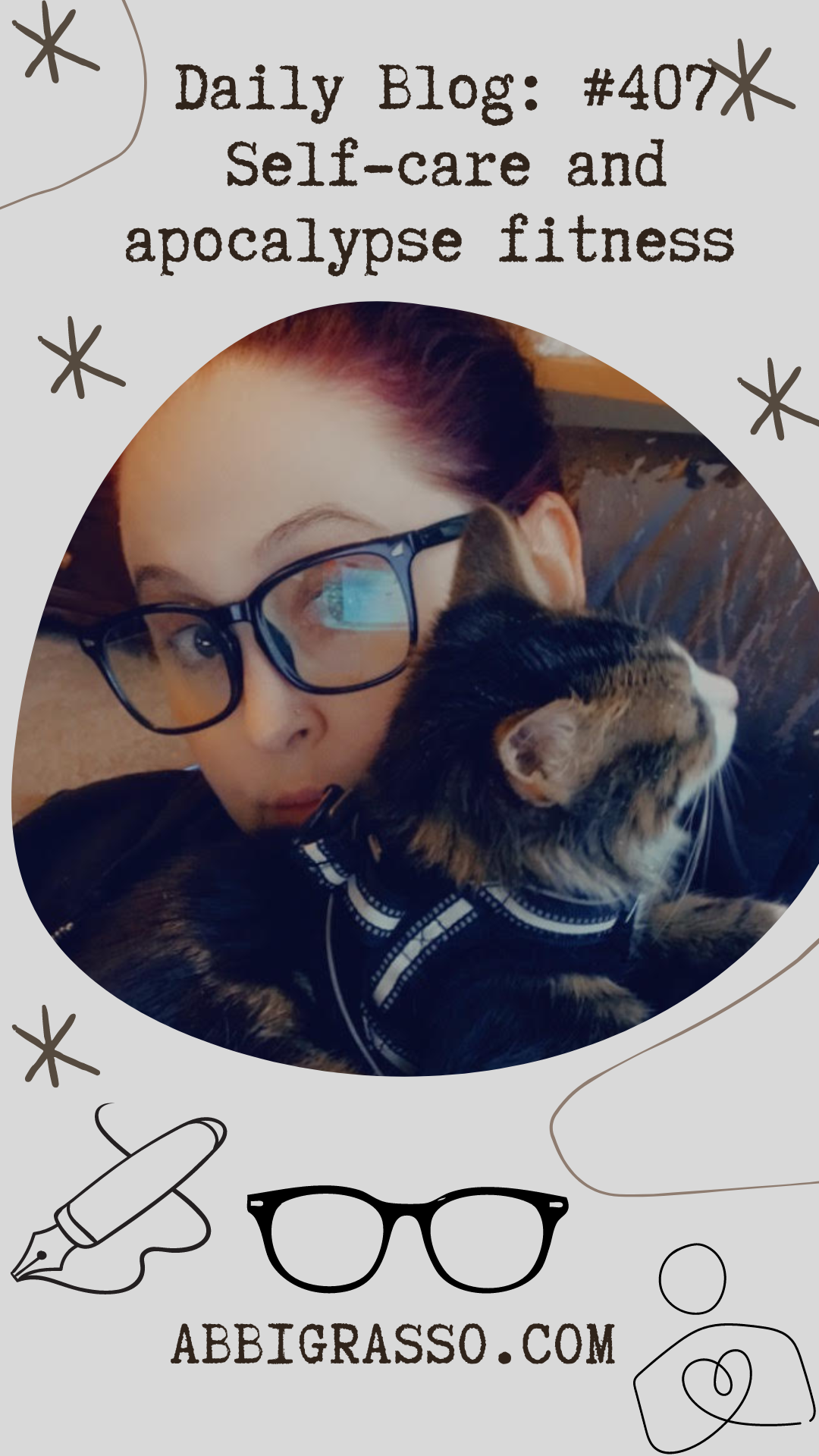 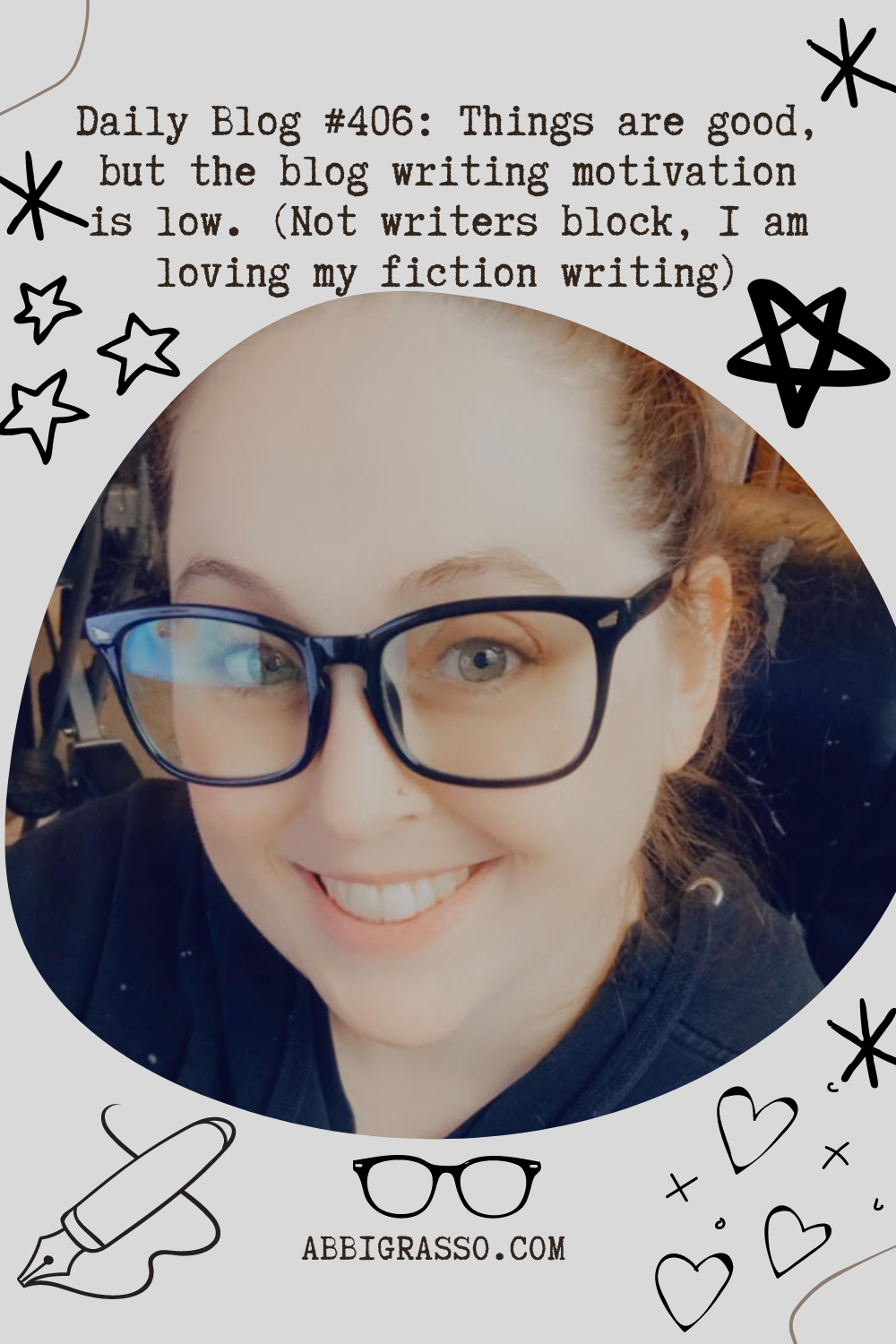