I am drinking my fourth cup of coffee, and I am exhausted. For anyone saying “Abbi drink water!” don’t worry…I have had 16 ounces of water for every 8 oz cup of coffee.

Also, in case you were wondering, I am getting lots of steps in with my many trips to go pee, from being so full of fluids.

It is now winding down, in the later half of the work day. I have been hard at work for much of the day, trying to finish some stuff up and make sure that I am not behind tomorrow. As the year winds down, every day becomes more important, because the last thing you want is for a schools budget to close before they receive paperwork from you that enables you to get paid.

Because, believe it or not, people owing a company money isn’t always enough to guarantee the money.

Tonight I need to cook dinner, do some mild cleaning (litter box, sweep) and I should probably try and fit a work out in at some point.

Bret is still not feeling great, the dizziness comes in waves, and it really sucks seeing him in such a state. It’s hard to be festive and excite for the holidays when worried about your partner and his health. Also when you are a little worried about money, but hey, is it even the holidays if you aren’t worried about paying for presents, bills, and food.

So, here I am drinking my fourth cup of coffee for the day, dead ass tired, but, hopeful, despite all odds.

I am pretty damn tired, but, hey, that is, in theory only temporary. What makes me hopeful?

There is a song, from Bo Burnham, in which he talks about God, and God’s love.

“If you want love then the love has gotta come from you” he says.., when I first heard it, I loved it, and I hum it to myself all the damn time.

Self love matters. But in this context, I am saying that the confidence and hopefulness of the future is coming from me.

Well, lets talk about how days go sideways, shall we? As you may recall, my plans for last night were to do some cleaning, work out, shower, and chill.

But then Damon called Bret, because he has a talented friend who needs music, and Bret and said friend, Gideon, talked and discussed music for a few hours, and I didn’t start dinner until they left, leading to a later dinner and shower…and nothing else really done.

But, they had a great chat and I think moving forward they will be doing well together, so I was fine with the time loss, but, here it is the next day and I am once again scrambling to catch up.

Thankfully, Bret has been so dizzy he can’t get up, so I am able to get ready without anyone in the way or occupying the bathroom, but he still feels unwell, and making it to work on or around my target time is far from worth it.

Today is incredibly cold, for Texas, which makes getting into the spirit of the holiday a bit easier, I suspect, for many people.

As for me, I am enjoying some coffee, (big surprise), and watching some YouTube videos while I try and sort some stuff out at work.

Today is, I am hoping, a good day, but I would be lying if I said I wasn’t starting to worry about some stuff.

Namely, worried about Bret. His Labyrinthitis isn’t clearing up as fast as i was hoping it would, and he is still pretty well don for the count. This absolutely has me worried about money, as well as my partner in general.

Bret has five days paid off, after like two years employment here, (all any of us get is five days, one work week, paid off, no matter how much time we have worked here…no sick time, no paid holidays, just those five days) and he is trying to use it for this time he has been under the weather. Assuming he gets to use the time, we won’t be as screwed for this time off.

Mind you, it won’t be enough to cover all the time off, ultimately, if this Labyrinthitis doesn’t clear up soon.

But, even if we do take a fiscal hit, it’s okay. There is more to the holidays than presents, even though I have been cutting down our list every week it feels.

Now I am hoping to at least get us a few nice things that we both need, for the holidays, like socks and underwear, and of course, food.

I say all this to say Bret and I are working hard to improve our finances with savings and investments, which seems to be the only way to improve some of the stress I am frankly under everyday.

Also for us to move forward in the new year in a positive way.

So it is now the afternoon, I am waiting for a report to export that has my computer, or at least the accounting software, completely tied up.

I should probably eat some lunch here in a minute, with it being nearly one, but I will probably just get another coffee because I am tired and today is day one of “Aunt Flow’s” arrival, so…Caffeine sounds better than leftovers right now.

I want to get this blog posted, so that way I can work on the next one, but also, I think the days of my partner being unwell, is really wearing me down. I have so little energy for writing, or any creative stuff, and I am even struggling with my day to day in my job. I need some time off. Thankfully, next week seems to be a week of maybe 8 hours total, so I will be SUPER BROKE and likely unable to even pay our bills. Bret’s check will also be non existent.

Yeah. Real life talk: This shit is stressing me the fuck out.

I hate how this company handles holidays and paying its employees, and I hate the system that doesn’t allow people the time and funds to get healthy, and also pay bills. Like, what the fuck?

There is no way we will have a holiday, hell, we may not have a holiday meal. We will have unpaid time off of work, in which I get to spend all day trying to make something from nothing. And clean. And be too stressed to work.

It isn’t fair. It isn’t right.

I won’t grind on this…I don’t want to be a whining person, I have plenty of reasons to not be bummed but right now everything is a bit much, and I really wish I had some sort of support. Or even someone who could say, “Hey, Abbi? I see you really trying, EVERY day to be a good person, a happy, kind person. and I see you spending most of your time every day to make the world around you better. I see you, and your effort matters.”

Even just having some support would help. It is a bit stressful right now.

But, hey, I don’t think any of my readers read this far into my blogs, but on the off chance someone is (hi! Leave a comment so I can thank you personally), I will change the topic to something more appropriate.

Like slaying the zombies that keep you feeling bummed, which in this moment, is the fear and worry of not having enough money to really have a nice holiday.

We really don’t need presents, much of what we are getting for each other is just helpful stuff for the new year. I just want to make sure we make it to the new year.

Today has been rough. But I won’t let the zombies get me down.

Because zombies aren’t worth it. Fight the zombies.

If you wanna fight zombies then the fight has gotta come from you.

Happy Blogmas Day 16, I am going to post this so I can get to work on Blogmas Day 17, and get that scheduled for you all tomorrow morning, which was my intention for this blog, before we had company last night.

P.S.- I know it is unlikely that anyone read this far, but if you did, thanks. I will do my best to have my usual happy go lucky attitude for the entire blog.

I thought I posted this. It’s from one of my walks in one of my favorite spots in the city. A place of peace and fairly safe. And very pretty.
Good tip for life in general, and for anyone getting ready for hurricane (or any other disaster) season. Drink your water and stay hydrated.
Behold! My new wheels!! 🚲
I don’t number the rules of Flake City survival, which mirror my own personal rules of survival- but this one is likely what would be number one, or the biggest, most quoted tip.
Been going on more walks and stuff. I talk about it on the blog a little. Also, tomorrow on the blog the final chapter of Flake City Volume One is published so- definitely check out abbigrasso.com if you wanna hear about my walks or read my writing.
With times as they are, I figured I would drop this little helpful tips graphic I made for everyone - remember- zombies can mean anything and it’s always some sort of apocalypse now a days.

Daily Blog #303: Don’t be so scared of the Tanks you underestimate the Chargers 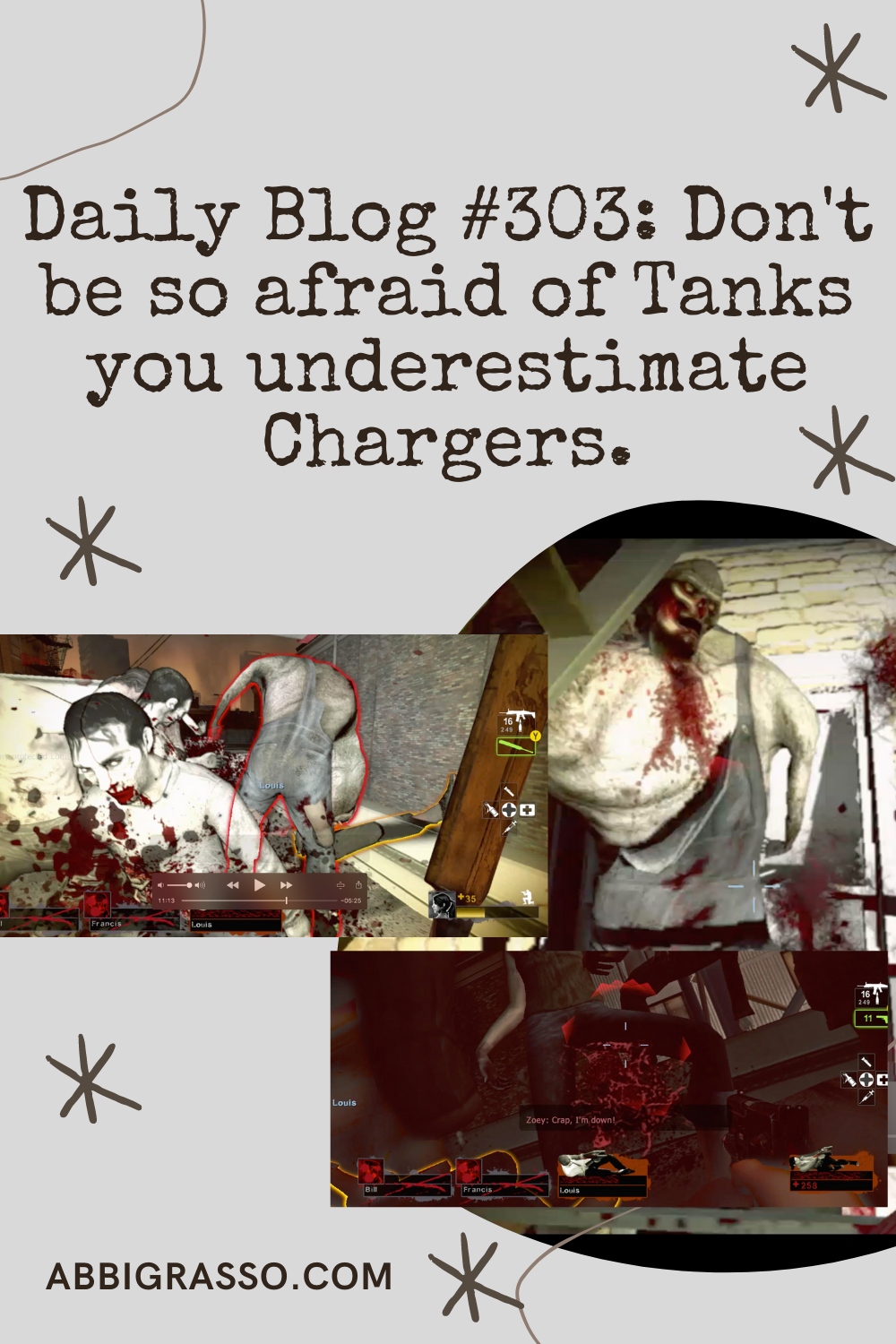 Daily Blog #302- Getting into a new content schedule while fighting messy depressy spell and vaccine side effects.

Daily Blog #301: Flight home from ATL, and how being your best self isn’t just for the apocalypse.

Daily Blog #300- Getting real on the blog and cutting off toxicity.