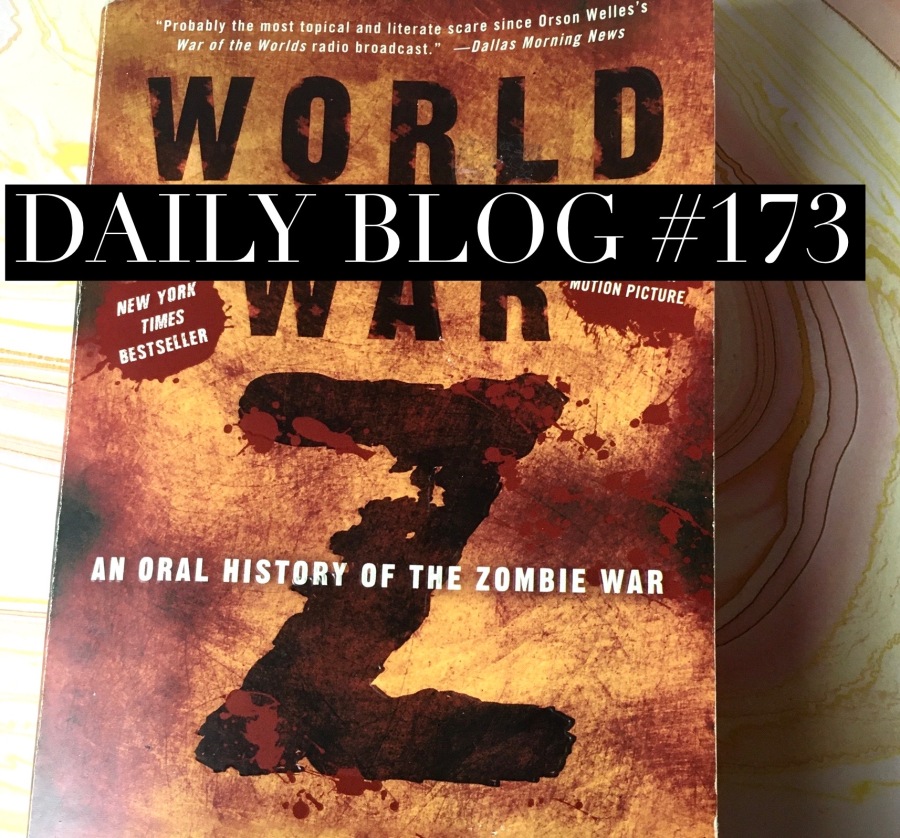 As you may recall, I recently read World War Z and reviewed it for the blog. I promised, in that blog, to compare the book to the movie in a separate blog post, so I could focus on the review in that blog. If you want to check out the review, please do.

And now, on to the comparison between the movie and book.

First: Nearly every person I have heard of who have both read the book and seen the movie fall into two camps

1: This movie is trash
2: This movie isn’t even the same as the book so I will look at it as it’s own movie, and claim the movie is good, but has nothing to do with the film.

Both camps can be correct. The movie, when compared to the book, is kind of trash. The movie on its own, as its own story, is very not bad. Very not bad indeed.

But…yeah if you compare it to the book, the movie does not hold up…but lets discuss why, and some key details that make the movie its own thing, NOT a movie adaption.

The movie? The main character is Family Man Brad Pitt, who’s character name really doesn’t matter much and I will probably just call him Brad Pitt this whole comparison.

There was no reason, in my mind, to change the story like this. The book, I thought before reading, would maybe not have a flow that allowed for filming, but the story is told with people telling stories, with the journalist having a bit of a synopsis before each interview about where they were currently located, the movie could have had natural lead ins for this information. Bigger sections could have easily been done in action, whereas other shots could be told in interview style.

But alas, what the book did wonderfully, the movie…did not.

So the movie instead shows Brad Pitt and his overly picture perfect cliche families having tons of precious, perfect family moments, until finally we have some vague movement towards action. Cut to a car scene which leads to an all out panic. Brad Pitt, in a series of duex ex machina type bits of luck, saves his entire family with no damage, gets to a store, has a few minor scares, gets the medicine for the (convenient for early movie family drama minus zombie activity) sick with asthma daughter, and get to running again. Due to some more luck and plot armor, the entire family is able to be air lifted at dawn from a tall apartment building, all they need to do is survive till day break, or whatever.

Of course, they try to get the family they hide with to go with them, they refuse, the happy family makes a break for the roof, the kid from the Hispanic family our white privileged protagonist family hid with, makes a last minute arrival, saving Brad Pitts ass, a la plot armor, and we learn that his family was attacked, and he grabbed his dads gun and ran. Low key, more of this kids story should have been covered, if we are going to derail from the book, because damn, what a survivor.

So the kid joins the family, after Pitt’s character stands on the ledge of the building to make sure if he is infected from flying infected blood landing in his mouth, which, is pretty cool.

Never mentioned in the book, as none of these characters really exist, but whatever. This cool “make sure I am not infected” test is pretty cool, and makes the movie a bit better, and improves Pitt’s character..

Brad Pitt and perfect family, joined by brave survivor Hispanic boy, end up on a government boat, safe and such. For conflict, and to keep the movie from becoming some super interesting “see how humans handle lack of action” movie, Brad Pitt is told, look, essential personnel are the only people needed on our super safe government boat, if you don’t work, you, and definitely your punk ass family, ain’t essential, we need you to go back out into the field and figure this mess out, because the deux ex machina that keeps you alive also says you are good at getting in and out of places and knowing science and outbreaks. (I need to re-watch to make sure it isn’t stated but I feel like he is some vague ex military meets CDC type bull shit)

So Pitt is sent out into the world with a virus expert who blows his own head off on accident. After that disaster and some others, we do, as an audience, make our way around the world, as the book did, however we lose so many great stories so Pitt can dramatically look out windows and try to get his phone to work.

(I am omitting a ton of crap here, but I am not reviewing the movie, I am comparing it to the book. The scenes I am omitting aren’t in the book, and the way the movie covers places IN the book isn’t the same. Gone are the interviews, and in their place we have some characters that may have one been the interview subjects of the book, but that existence is long since gone.

We end up in Jerusalem, where the safety of a massive wall is undone by singing, not the crowds. This is similar to the book in one regard- the dogs that can smell the infection.

So while running away, Pitt cuts off a chicks arm to save her from a bite, and the two manage to get onto a commercial flight, which has a zombie stowaway, leading to a plane wreck that both unbitten humans manage to survive. Pitt, stabbed with some metal, and the one handed wonder, make their way to the CDC, where he collapses for a couple of days. The phone going unanswered tells the people in the government he must be dead, and the family is tossed off the boat, to some (assumed) semi safe land.

So Pitt gets a hold of them, finds out his family is safe, ish, and starts trying to find a cure, figures out a vaccine, and the human race starts fighting back. I am condensing a bunch of action here.

NONE of this is how it happens in the book. The only medicine was proven to be a lie, not actually helping anyone prevent the virus, and lead to The Great Panic, an event that is referenced many times in the book but apparently never happened in the movie.

My problem is mostly that the book is a rich, diverse, well thought out book illuminating likely situations and scenarios inside a zombie outbreak. The movie is literally another zombie movie with the same cliches, tropes, jump scares, and lack of originality that most others have.

The book had tons of brilliant bits of story plenty of other zombie stories don’t bother to talk about…like what happens to the astronauts in space when zombies break out on earth.

Discussing that zombies can’t swim, but they can still chill in water, float, etc, and cause problems.

Snow, and how it CAN slow zombies down, but if it’s cold enough to freeze them, it can cause problems for us too.

Or that said winter lasting longer because of the darker atmosphere from increases in smoke from fires to keep people warm, and the deforestation to areas where people are trying to survive the harsh winter that keeps the zombies at bay.

The movie isn’t bad. No, the movie is actually pretty decent for a zombie flick, although it is not without flaws, either.

The book is substantially better and has less flaws, more thought, and is a great piece of zombie content.

The movie and the book really don’t have much in common other than the name, and while I want to say “they exist in the same universe” I really cant. The information presented in the movie about an inoculation flies in the face of the book explaining the vaccine being fake, and so much else happening. In the book, the outbreak happened slightly slower, more authentically, with misinformation and over saturation of problems distracting humans from the danger. The book beautifully shows how a zombie outbreak would likely happen, and the movie instead opts for how Hollywood thinks zombies would happen…which is to say, whatever looks most fantastic on film and makes Brad Pitt look cool on movie posters. I suppose they could just be angling for a sequel, but I am fairly certain that would lead to more derailments.

Watch the movie, before the book, to be disappointed by neither. If you have already seen the movie, that’s cool, just look at the book as a different thing, or sit back and enjoy the much better book, knowing you at least got to enjoy the film before seeing how fucking awesome the book is.

Go read the book and watch the movie, and tell me if you agree with my comparisons.

If you want to buy the movie, please click this link, and I receive a small kick back, at no cost to you!

If you want to buy the book, click THIS link, and again, I will receive a small kick back, at absolutely no cost to you.

One thought on “Daily Blog #173: Comparing World War Z movie and book- Which is better?”