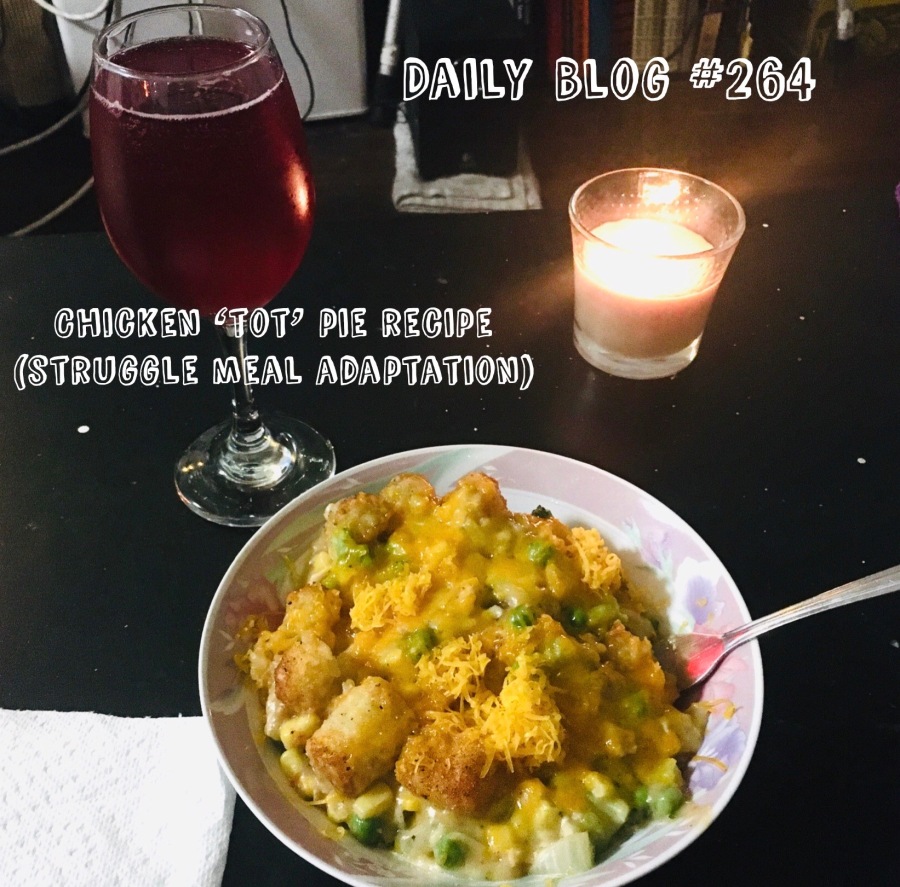 Recently, I was watching one of my favorite Snapchat shows, Struggle Meals, and the host, Frankie, gave me an idea for a dish I really wanted to modify a bit, and try! So, this is a blog talking all about what HE did, and what I did, and YOU can decide if you want to make it yourself, his way, my way, your own way…but you should try it, because holy crap! It was super yummy!

This is a meat recipe, so my apologizes to vegetarian and vegans. I am sure there is a way to make this for you, using veggies, and if you want me to figure out a recipe for you, then let me know in a comment or DM, and I will actually dedicate that energy for you.

So, now, without further adieu, lets talk about the food!

The recipe was originally a budget friendly chicken pot pie, but in lieu of a crust, Frankie used Tater-tots.

And that is where he had my attention.

See, little known fact about me, I can’t fucking stand chicken pot pie. The gravy thing is always nasty and the crust never tastes enough like a proper crust to make using a crust worth it.

If you want me to send you the original episode of Struggle Meals, then follow me on Snapchat. I watch Frankie’s struggle meals all the time, so I may be doing more of these blogs, and if you want to follow along at home, you should watch his stuff…

Also he is brilliant and has a lot of hacks for getting you healthy, delicious meals, at a great price, so I suggest everyone follow him, more so after trying this recipe.

The recipe starts, as all good ones do, with butter, garlic, and onion. I do the same as Frankie does, but he has fresh herbs and I didn’t, so the dried Thyme I used versus the fresh he used, was our first difference. I also added a few more things, including parsley, salt, and pepper.

The chicken Frankie used was chicken thigh, which I have been trying to use more, as chicken thigh is a flavorful protein that is affordable. He originally baked his in the oven with salt and pepper…

But I season my food, so my chicken got a full round of salt, pepper,paprika, garlic powder, onion powder, a little lemon pepper, thyme and parsley, before being banished to the oven at 350 degrees F (176 C), cooking until done, and letting it cool while you work.

While that chicken bakes and cools, your garlic and onion should be cooking up with whatever seasoning and herbs you added and the butter. Please note, Frankie always suggests doing things like grabbing extra butter packets and such from take out. I am actually trying to not use take out, so, I don’t always have the take out or “free” options he uses to reduce his overall costs, but, we can still use the full sized pay for version and not bankrupt ourselves. I may do another blog about cheap places and ways to get flavor, if any of you awesome Blog Readers want to read it- just let me know.

Once the garlic and onion are translucent, but not browning, you will toss in flour, equal parts to the butter you use, is Frankie’s suggestion.

I like Roux. I make roux’s better than your average white girl. So I play with stuff. He isn’t wrong, you need equal parts. But I am not going to limit myself to whatever butter is in the pan. I like a lot of Roux, so I can cram in more veggies and chicken into the pie/casserole anyways.

I tend to just toss in anywhere from a quarter to a half a cup of flour, more if I am making a larger amount, and add in the butter I need as well, if the butter I used for the garlic and onion wasn’t enough. Once the roux starts to form, and you get that amazing toasty roux amazing smell, grab some chicken stock, and add it in! I used about a half a can, because I didn’t have any homemade prepared, but you could also use an entire can, depending on how much you are looking to make. Once it cooks a little bit, add in milk.

How much? Iuno, enough? I’m Italian, we cook by our eyes. Hence the pictures I took, making this dish for the third time, so I could show, not tell, how to make this…because who the fuck measures? We all live in different parts of the world, with different cooking factors, like humidity and temperature, along with stove and environment. Enough to make it creamy, at least a splash.

So, add enough cream (whatever kind of milk you opted for), anywhere from a splash to around as much chicken broth as you used. While this sauce thing cooks and becomes INSANELY delicious, shred or dice up that delicious chicken you baked that has been cooling.

A brief note here, about the varying recipes- I changed the veggies up, and here is why:

Frankie used peas and carrots, frozen. I don’t like cooked carrots, and this is all about making a chicken pot pie I will actually enjoy, so I grabbed some corn, proper corn on the cop, and roasted it with butter, salt and pepper in the oven, and then cut the kernels off. (But when I made this for the blog, FoodTown didn’t have good looked corn on the cob, so I subbed frozen back in. This recipe works well for these kinds of modifications.)

Anyways, Frankie adds in frozen peas, and carrots. I use frozen peas, because I agree with Frankie that they are the best and cheapest way to get peas picked at their peak, and my corn, because I don’t like cooked carrots much. Frankie also used pearl onions, which I forgot my first time at the store for this recipe, but the second round, I remembered, but FoodTown didn’t have em, so you can totally omit if needed, too. I also wanted to add broccoli, which FoodTown had, so I grabbed a bag of frozen broccoli, as well, and it adds a nice filling flavor to the pie which I was very pleased by, so i suggest this as well.

Mix this all up, in the pan. Keep in mind, Frankie has a cast iron pan he can put in the oven, and the ones I have, I can’t put in the oven- so we have another change.

I lined a glass casserole dish with parchment paper, because I don’t like using foil, and poured the mixture into the prepared pan.

Frankie, once the mixture is done, adds the tots on top. My first time, I topped it in cheddar and then added the tots, my second time, i forgot the cheese. Third time i went back to the cheese, and also added some seasoning on top of the tots.

I think I like it with a smidge of cheddar on top, but I also add cheese to the top of my portion, so you can do the same. I have also used crumbling white cheese and that was my favorite, because of the flavor combo.

Anyways, cheese or no cheese, you put your tots on top, like you see here, (Seasoned or unseasoned is your choice, I suggest yes because yum!) and then banish the whole thing to the oven. I cooked according to the tots instructions at first, which was 450 F (232 C), which worked out well, but I also tried it at 350 F (176 C), which also worked well.

When the tots are golden brown and done, the meal is done- because everything else is cooked from its time on the stove in the pan, before ever going into the oven.

I let the dish set for a minute or two, long enough to shred or cut up some cheese for the top, or to take a gravity/smoke a bowl, and then serve up a portion. Letting it have time to set, is important, I learned on my third round of making this, when I was super hungry and didn’t wait. Otherwise it will be a little soupy, but not too much, if you let it set a little it will be a bit more solid, but really, you will need a spoon type serving thing anyways so, whatever you wanna do, do that.

The first time I tried it, I lost my shit, and I ended up making it again like a day after I finished eating the leftovers, and I am going to be buying the supplies on my next trip to the store, and yes, I will be making it again. (For not only illustrating this very blog, but also eating, because holy shit delicious)

This was a great dish to find and make because I have always wanted to like chicken pot pie, and this is a cheap, easy, and amazingly delicious version that I actually find amazing. Thankfully, shopping at FoodTown gave me the budget to buy the stuff for this, and other recipes I want to post on this blog, either modifications to Frankie’s recipes, or my own inventions. Or to just make this dish a few more times. 🙂 (Not sponsored, obviously, but man, how cool would that be?)

Definitely follow Frankie from Struggle Meals, there is a YouTube channel as well as his SnapChat show, and don’t forget to follow me on both of those apps as well, @AbbiGrasso is my name on both YouTube and SnapChat.

Thanks for reading! (Go get cooking!)

Daily Blog #293: Three part journal entry with some action at the end. 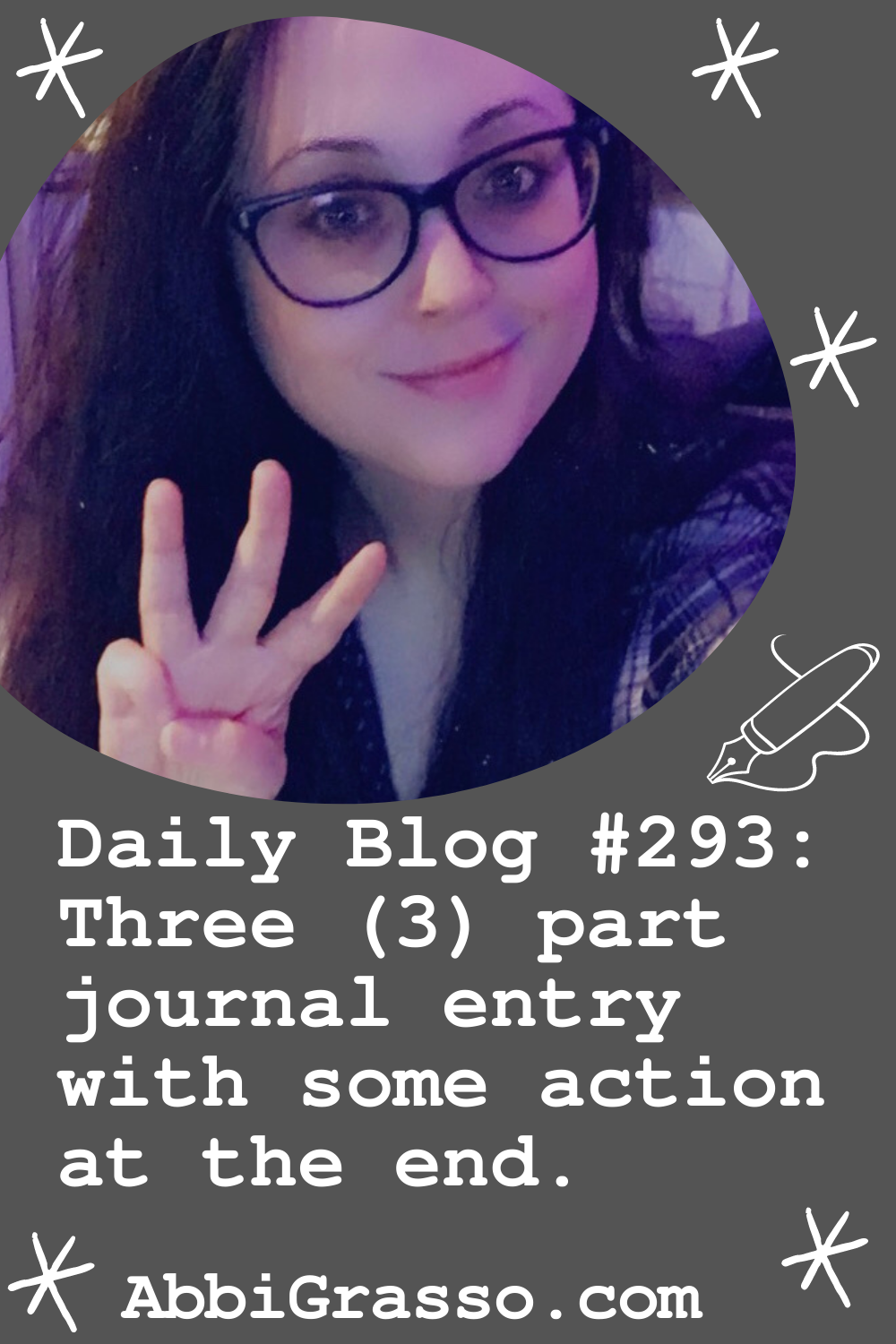 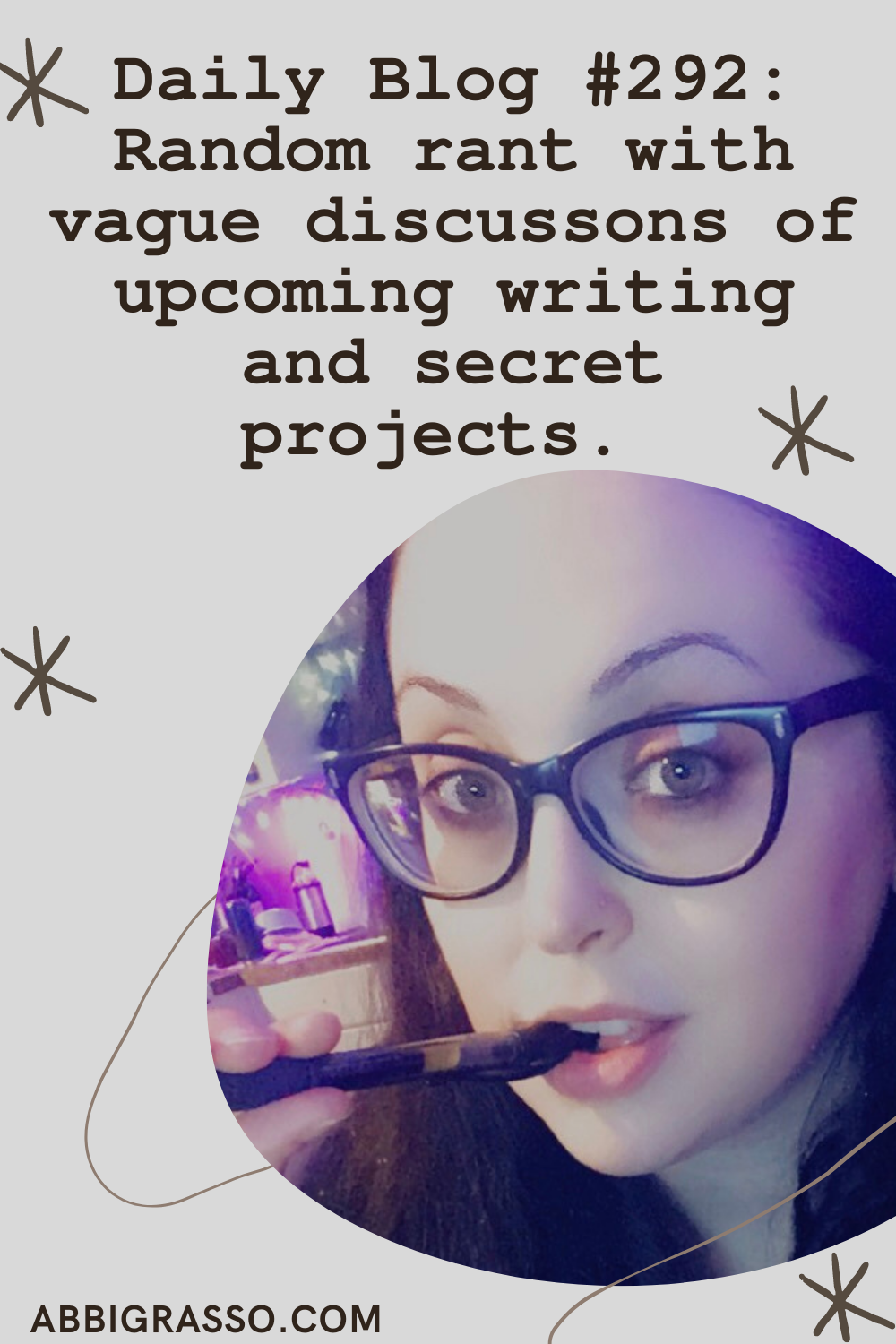 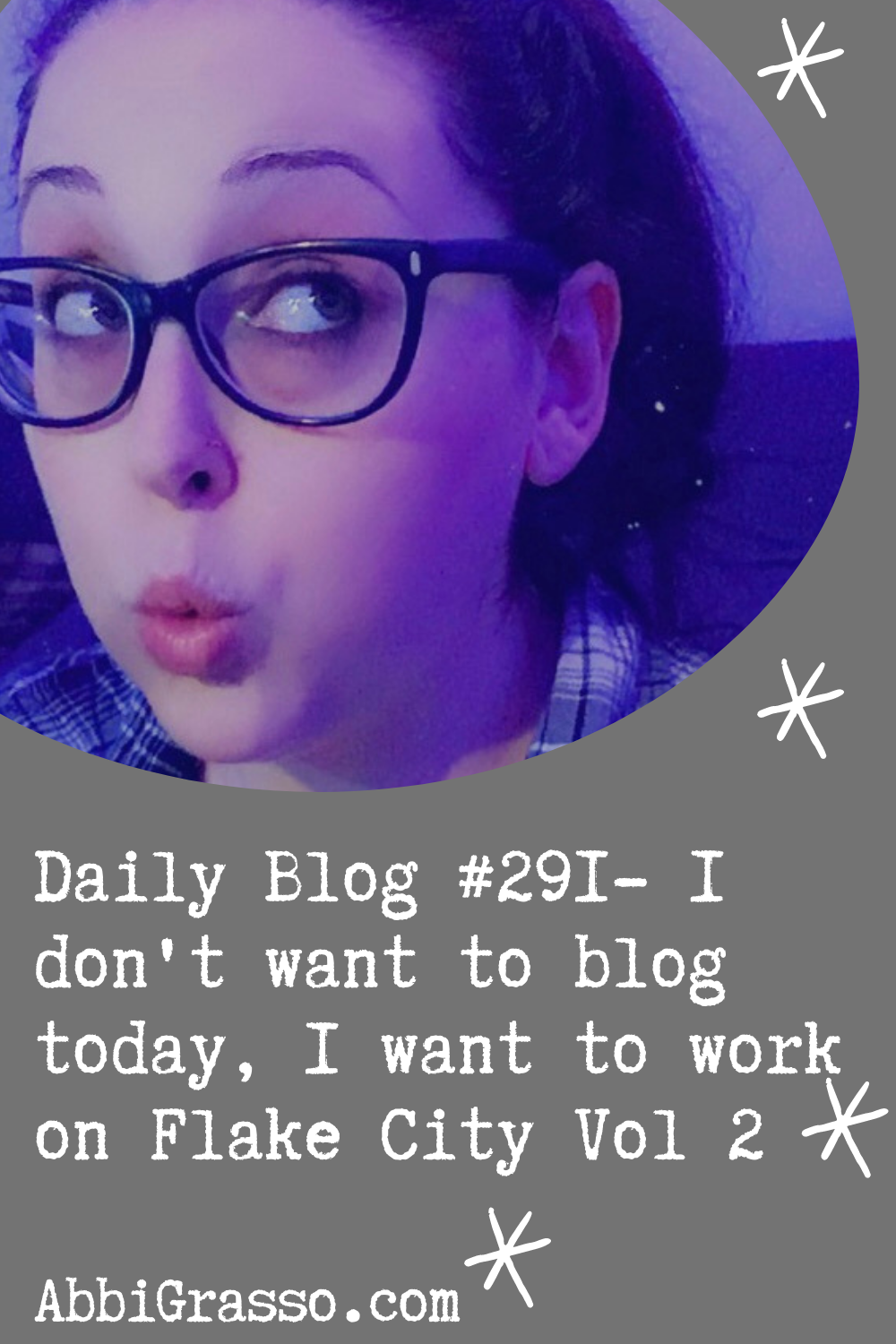 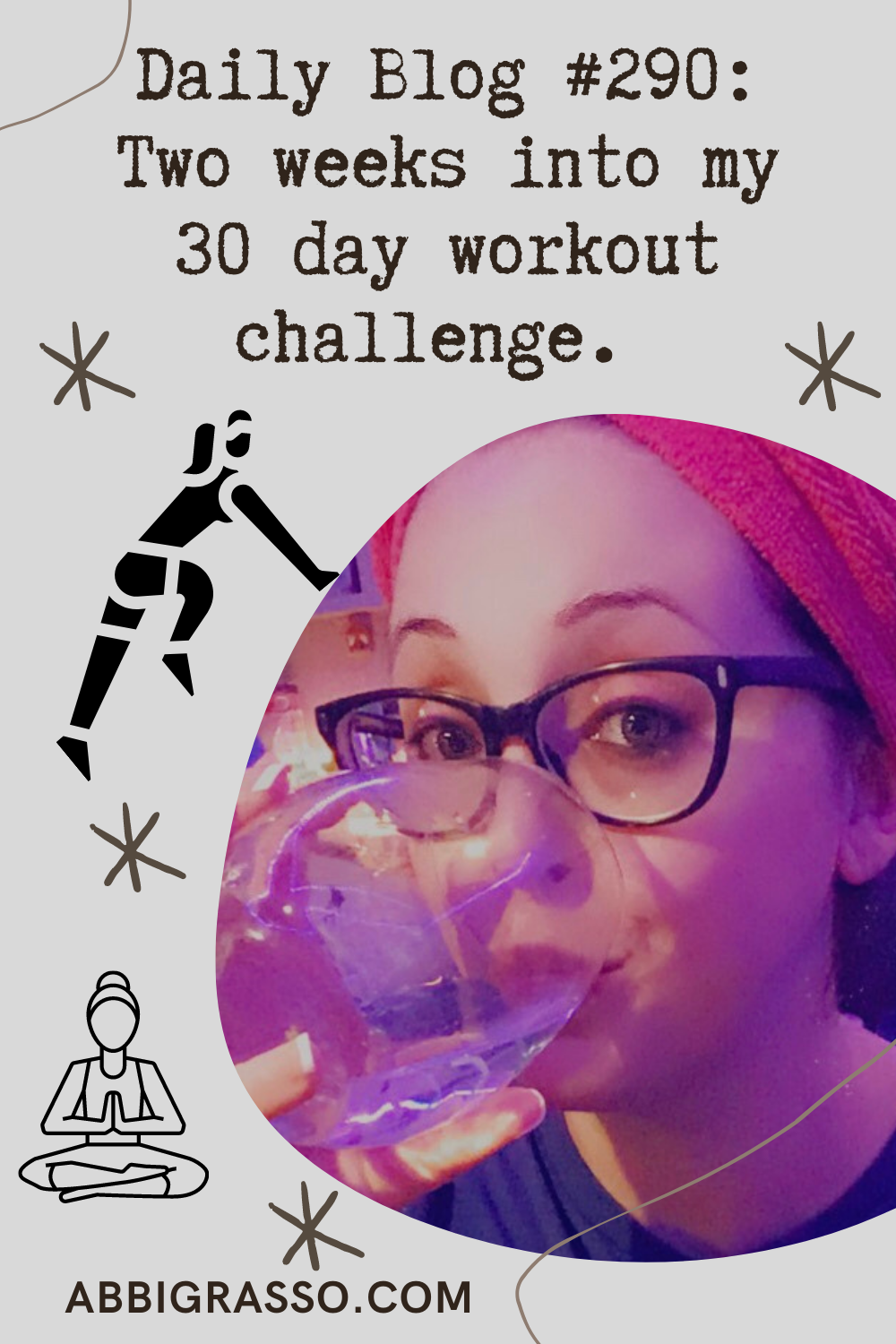 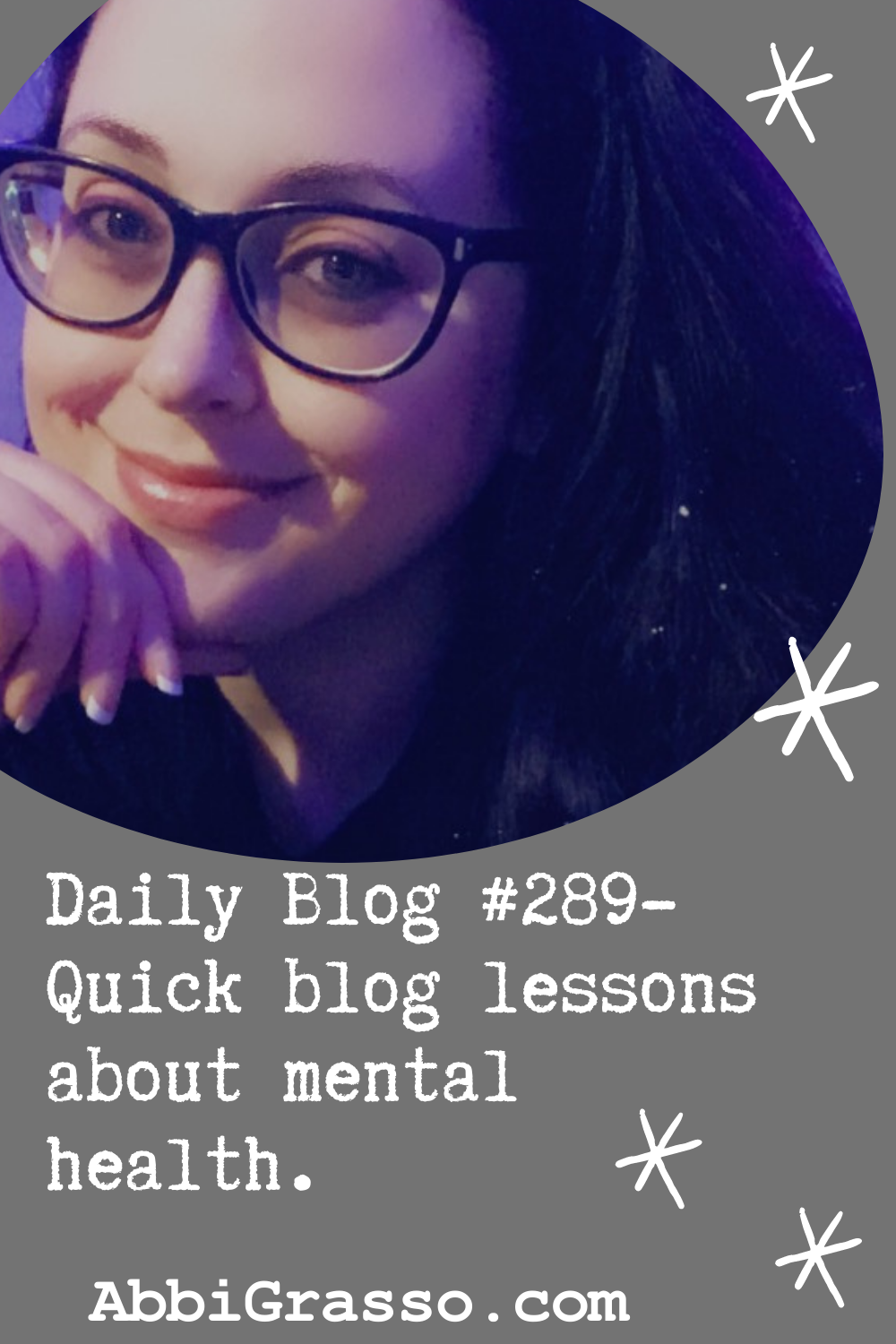