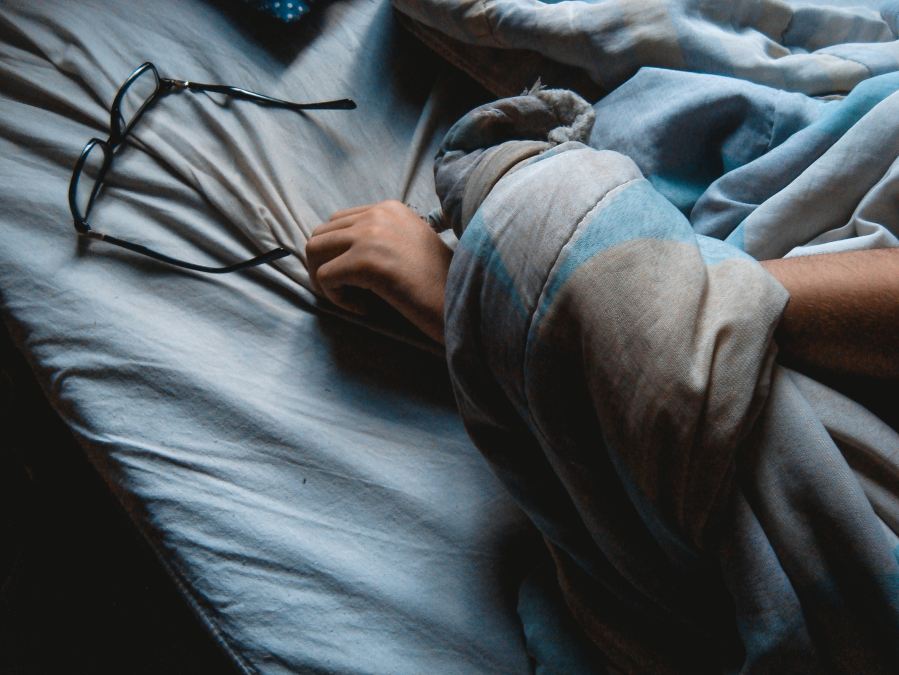 I don’t feel well and I don’t want to be at work. Super annoying.

I’m listening to podcasts and trying to get some work done, or even some writing, but work is taking up so much energy and space in my brain right now.

My creative well is low. I need to do a bike session tonight and try and get my head right. Not feeling well has me not wanting to work out but now I’m thinking I may need to, just to sort through some ideas. I’m at a point where I need to decide which parts of my universe are going to be released next, and in what format.

Some choices have been made, some haven’t.

I straight up left work. Got super tired of being there, being totally miserable, all to do very little actual work. The whole time, charging someone (who, by his own omission doesn’t really have the money to pay half of us) money per hour, for me to sit there half assed pretending to work?

I can leave work, saving said asshole some money, and also increasing my overall quality of output in the big picture. So, I left work early.

Now I’m home, about to put on some music, clean, and make some soup. From there, I will probably do some writing.

Sometimes, we make our own destinies, right?

So I decided to get some cleaning done, before I made some soup. Nothing major, but got some cleaning done. I added some avocado to the soup and called it a day- have to wash those dishes and a couple more but now the bathroom is a bit more tidy, the counters are cleaned off in the kitchen, and the living room, kitchen, bathroom, and hallway are all swept.

I feel a little better, just having a cleaner place, having had some food, and also got the blood pumping. I will definitely be dragging out the bike tonight to work out and get another sweat- hopefully it helps some of this phlegm break up.

To that aim, I want to do a dab or two, but sadly, I didn’t buy any wax. Furthermore, I doubt I could at that point in the pay cycle, even if we weren’t saving up money right now.

But I can use my hair straightener to make a dabs worth of wax or so to take before biking to help really get stuff out of my lungs so I may go ahead and do that, to maximize the work out, and also to reward myself for working out while I am feeling unwell. I get it may help me feel better- I don’t care, I still don’t love working out or getting sweaty.

Rewards, like dabs, I like. But I also don’t want to go through that much herb, so…I shall think on it.

I may have company coming over in a little bit, so I am going to pause here and get sorted, and I’ll update later.

Later, on bike, start of work-out

It took me a while, but I finally managed to get my ass on the work out bike. I’m a whopping minute in and already hating it, so that sucks.

Mostly it’s uncomfortable to sit on, and my legs hurt, my whole body hurts, but I know this is ultimately pretty good for me, so even though I am miserable, here I am biking away in our living room.

We have a fairly small apartment, and really the living room and kitchen share so much space that I’m kind of in both but, the important thing is that I am working out and trying to feel better by doing physical activity.

For those of you at home going “omg Abbi rest!” Don’t worry, I did, but I also know this is probably good for me. I have balanced it by leaving work early today.

For those of you cheering me on, THANKS! This sucks, I hate it, but I know it’s good for me, so I’m trying.

Anyways, as mentioned earlier I need to work on my creative well, and keeping it stocked, so I’m gonna bike some miles and work on some character ideas. Be back later for the rest.

Later, on bike, end of work-out

Well I’ve been at it for nearly an hour now of either high speed or high resistance on the bike. Overall I feel sweaty, gross, and sore, but I suppose in general what I did was good for my health so I’m going to say I feel good for having done it.

Currently, I’m doing my bike cool down where I slow my speed and slow my heart heart peacefully. Generally, I try to blog in that time, and make good use of my time.

The biking was overall good for me, but I couldn’t say that it actually helped me with the creative well so I may try to squeeze some yoga into my evening and see if that, coupled with another 59 ounces or so of water, and a good nights rest, can help my low creative stores.

Okay, did some yoga too. I’ve officially logged nearly two hours of working out and I don’t really feel better, but I feel better for having done this much. If I am smart, I will quickly finish this blog, clean myself up, edit this blog, take some medicine, and go to bed.

Thankfully, it’s only 10:30, and while that is later than I would like to be taking nighttime medicine, it’s not the worst. I took some night time formula and now I’m sorting out the rest of my day. I already cleaned the kitchen (but I may have some cereal), so all I need to do is clean myself, edit and get to bed.

Life is a tricky fine art of balance, and tonight was definitely an illuminating say for how my evenings get spent and slowly, I am getting ideas for fitting more into my evenings.

Mind you, I still need to add about four to five hours per evening to my schedule, so it is a work in progress.

I’ll be logging my time today, and looking at my plans, but currently I think shorting myself an hour of sleep, per night, as well as shuffling around the order in which I am doing stuff, are my first steps.

Losing out on sleep doesn’t seem terrible wise, mind you, but I am worried about doing that. If I short myself an hour of sleep I may have long term problems, and I’ve worked very hard to keep my insomnia at bay.

The women in my family suffer from terrible insomnia and horrid nightmares; so I try to give myself the most peaceful sleep possible. I don’t like to add stress to sleep, or feel like I’m not getting enough, it makes my insomnia worse.

I’ve had trouble sleeping the past few nights, not just because of illness, but due to my stress, so, I’m going to log off, and clean this and myself up, and get myself to bed.

I hope tomorrow the Thursday curse doesn’t bite me, hopefully it doesn’t. I have cold brew and a little more day time medicine on my side. May you all have a wonderful day tomorrow- I have a feeling* we may all actually have a good one.

*feeling, in this context, means “stubbornness and determination to have a good day that borders on insane”

PS- Editing note, It is nearly midnight, and I am going to go journal. Hopefully tomorrow i have some fun notes on time for you guys. At the moment, I need a TARDIS.

Daily Blog #340: Things no one tells you, or sure as hell no one told me, about improving your mental health. 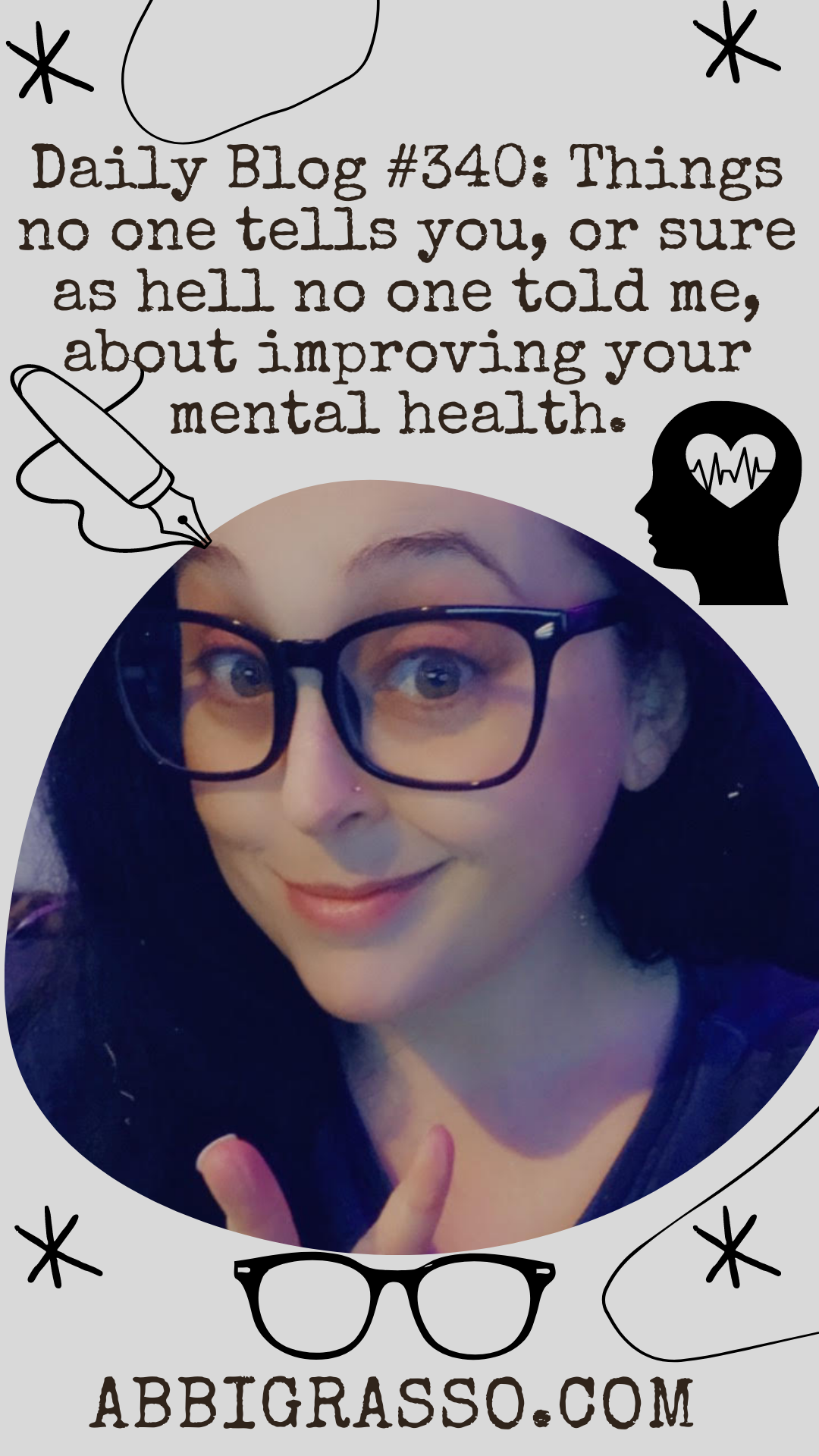 Daily Blog #338- Trick ‘r’ Treat may be the best Halloween movie ever and you all need to watch it. 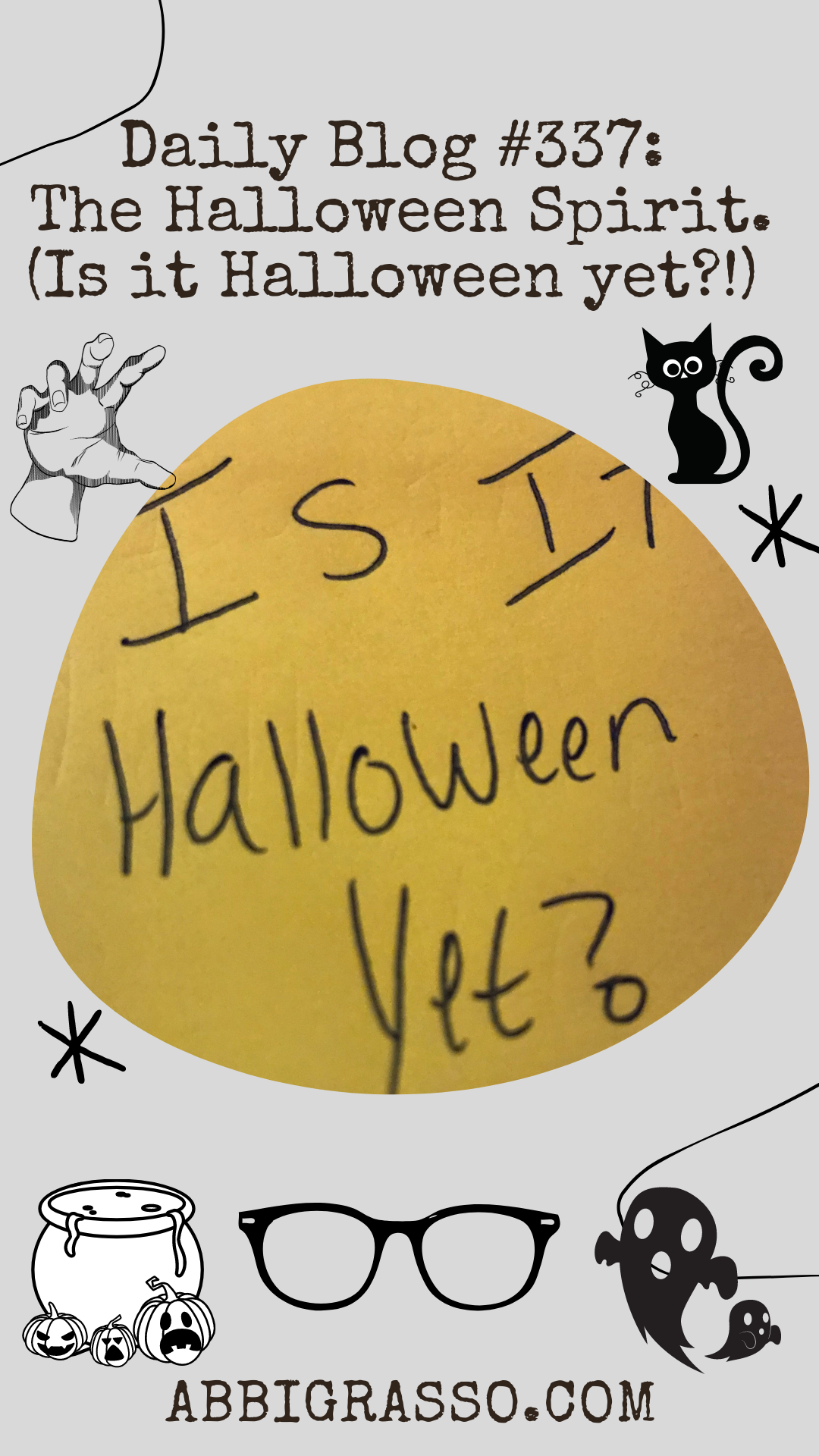